It was November 18, when the discovery of the new variant rekindled the fear of COVID in travelers: in reality, infections were already on the increase in Europe and there was already talk of a new wave, but the official discovery of the Omicron variant threw Europe back into a spiral of fear.

Of course, this fear has had a direct impact on the world of tourism: border closures, more restrictive border measures and travel bans for non-essential reasons are the well-known consequences of an increase in the number of infections. And even travellers, who are now familiar with the defensive mechanisms adopted by countries to contain the pandemic, are increasingly choosing not to travel, discouraged by this new climate of tension. The number of searches for flights to Europe in the last two weeks (November 18 to December 3) fell by 14% compared with the same previous period, from 61.8 million to 53.4 million.

Although the whole of Europe is suffering from the new wave of contagion, our analysis of tourist demand in each European country shows that, in some cases, the market is reacting in a more dramatic way, causing sudden drops in travel intentions. This shows us that some factors influence tourists much more than others. In fact, the countries that have suffered the greatest market contractions are not those with the greatest increase in infections, nor are they the countries with the highest number of Omicron variant spreads; instead, it seems that it is the word ‘lockdown’ that scares tourists the most. Of all the countries in Europe where the government has decided to impose a lockdown, demand has been much lower than in these countries, compared to countries with no lockdown and which might have a worse health situation.

As you can see from the cover image, the European country most affected is undoubtedly Austria, with a decrease in searches of 42.6% in the last fifteen days. Searches for flights to Austria had already been falling slightly, since the beginning of November, but then there was an obvious market crash corresponding with the rigorous intervention of the Austrian government. In fact, travel intentions, in fact, began to fall sharply when the country announced not only that it would impose a lockdown for the unvaccinated, but also that foreign visitors would no longer be allowed entry without a Green Pass (thus invalidating the fast-track buffers). Considering the reputation of Vienna and other Austrian destinations as winter tourism destinations (especially Christmas) the decisions of the Austrian government will certainly have a very strong impact on the country’s tourism economy. 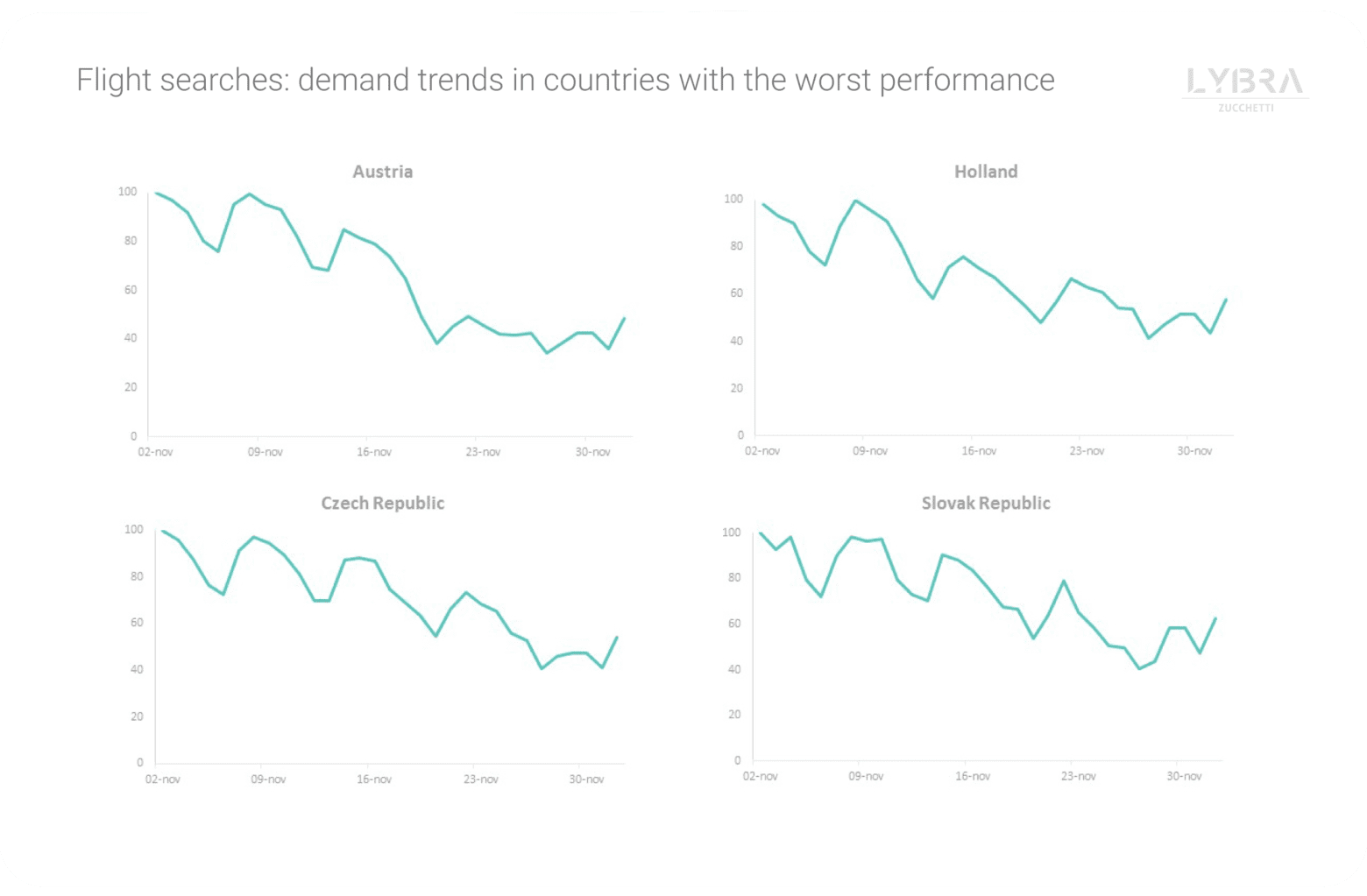 In the Netherlands as well, tourist demand began to fall at the first rumours of a new lockdown: between November 8-15, after the Dutch government’s official announcement, flight searches fell by 24%, but the situation worsened after protests broke out in the country’s main cities.

Slovakia and the Czech Republic, in third and fourth place respectively, stopped attracting tourists when average infections started to exceed ten thousand per day: here too, tourists were more discouraged by the announcement of new lockdowns and the imposition of mandatory quarantine for unvaccinated foreign tourists.