As you can imagine, it’s not likely we will be able to completely recover pre-Covid tourist flows during 2021. In fact, this will rather be a year of transition. We will certainly see a gradual rebirth of the sector, mainly conditioned by the spread of the vaccine, but not only that: in addition to the health situation and the coverage of the population, the interventions of the various countries aimed at planning the reopening to tourism will have a lot of weight.

Today’s travellers are still very insecure and tend to put off booking until the last minute, but still, they are very keen to travel and the Mediterranean seems to be the most desired destination for the summer.  The Mediterranean countries, which together used to attract about a third of the world’s tourists, are trying to revive the industry but not everyone seems to be equally committed: as unpredictable as the future may be, some destinations are falling behind. 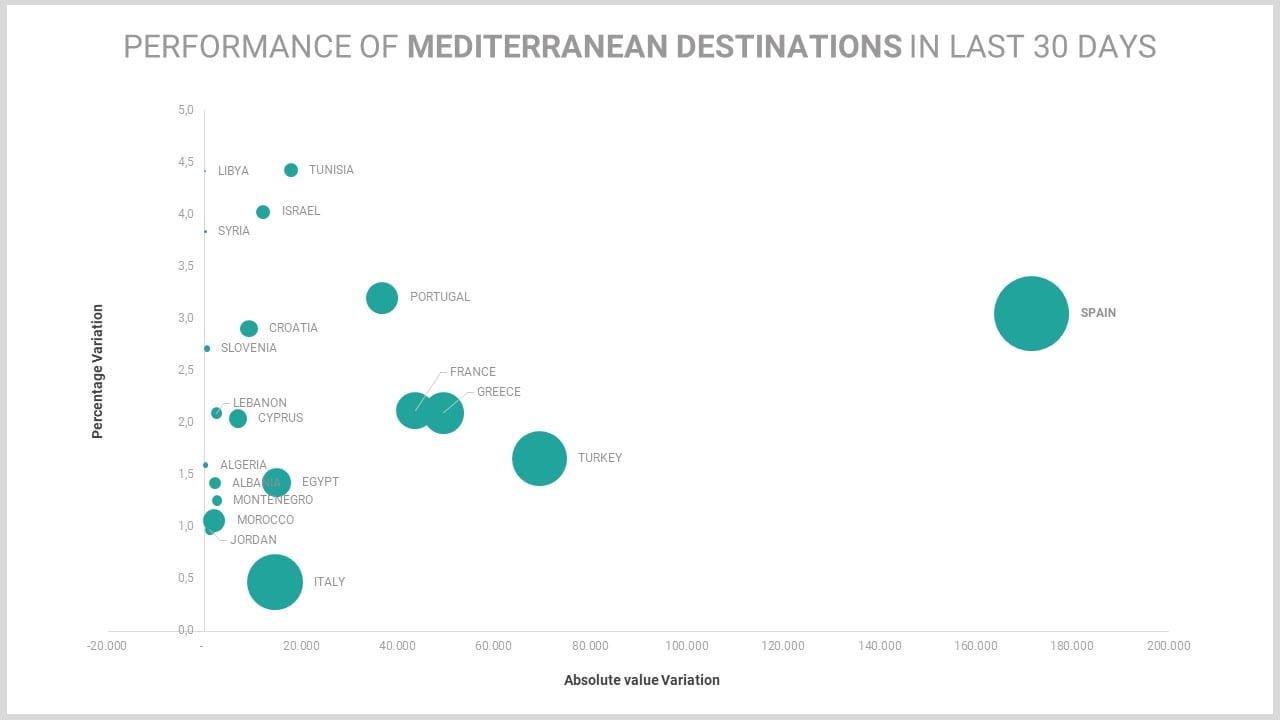 SPAIN. Spain seems to be the real protagonist of the Mediterranean and the only one really growing: at the moment it is the second most searched nation in the world (10.9 million flights searched), second only to the United States (11.8 million) and during the last thirty days it has grown by 3.1%, with an average of 362 thousand searches per day. The flow of searches, already slightly up in the first weeks of February, exploded in the third week, rising from an average daily variation of 1.5% to 4.5%. The strong growth of the destination is undoubtedly due to the contribution of a number of factors, first and foremost the UK’s plan to ease restrictions: immediately after the announcement of the plan by the government, British interest in Spain soared, with growth rates of up to 19%. In the last few days, German travellers have also contributed to the growth: a few days ago, in fact, Germany authorized travel to the Balearic Islands during Easter week and searches increased by 170% in the space of three days.

Spain’s good results are due not only to a successful reopening of its main markets, but also to the active role it has played in planning the recovery: during the last few months, the government decided not to close ski facilities and winter tourism slowed down but did not stop; a tourist corridor to the Canary Islands was organized with the tour operator Alpitour; the archipelagos were immunized and the Balearic Islands proposed to experiment with the Health Passport; some events in attendance have already been confirmed, such as Fitur and Mobile World Congress; etc.

Even though the pandemic has accustomed us to rapid changes and difficulties in planning, these measures have certainly had a positive influence on the insecurity of the market and today Spain seems to be the country where it is already possible to glimpse a sign of a restart, where the hope of a good summer season doesn’t seem so unlikely.

GREECE. Greece has also played a very active role in the attempt to help the tourism sector: the Greek Prime Minister, Kyriakos Mitsotaki, was the first to propose to the European Union the creation of a health passport to allow vaccinated tourists to travel without restrictions and, already at the beginning of February, Greece reached an agreement with Israel for the creation of a tourist corridor between the two countries. At the same time, the government announced that it was organizing its own vaccination campaign to vaccinate the inhabitants of the smaller islands in order to immunize them and prepare them for the summer season.

It seems that the government’s efforts are paying off, as searches for the destination have increased at a daily rate of 2.1%, but the real boom came a few days ago, when the Minister of Tourism declared that Greece will welcome all UK travellers, even the unvaccinated. Within a few days, searches for flights to Greece increased by 53%, and the average growth rate rose to 4.6%: the most active market, predictably, is the UK. Finally, Greece is among the top three Mediterranean countries for interest in the summer months, along with Croatia and Portugal.

TURKEY. Before Covid, Turkey was only in eighth place in terms of number of international visitors; today it is the third most desired country in the Mediterranean and the sixth worldwide, with 6.1 million searches in the last 30 days. There have been no special maneuvers on the part of the Turkish government to stimulate tourism or agreements with other countries: simply, the destination is succeeding because it is open with partial restrictions. Entry is only forbidden to travellers coming from some African and Middle Eastern countries, no quarantine is required for incoming travellers and, in general, restrictions are less restrictive.

SUMMER MONTHS. The most searched countries in the summer months, i.e., June-September, are: Spain (1.4 million searches), Greece (1.4 million), Italy (1.1 million), Turkey (0.9 million), France (0.6 million) and Portugal (0.6 million). In this case, Spain remains in first place, but with a less evident difference: most travellers are looking for flights to reach the peninsula in the months of March and April. Greece has clearly overtaken Italy: Italy, a country with predominantly seasonal tourism, has not yet implemented tourism recovery plans and is currently growing very little, at an average daily rate of 0.5%. In fact, it risks giving way to Turkey, which is growing at an average rate of 3.8%. Portugal, on the other hand, seems to be the country that is growing the most in the summer months: travellers who want to reach it in the summer have increased by 6.2% and searches are primarily for the month of July. 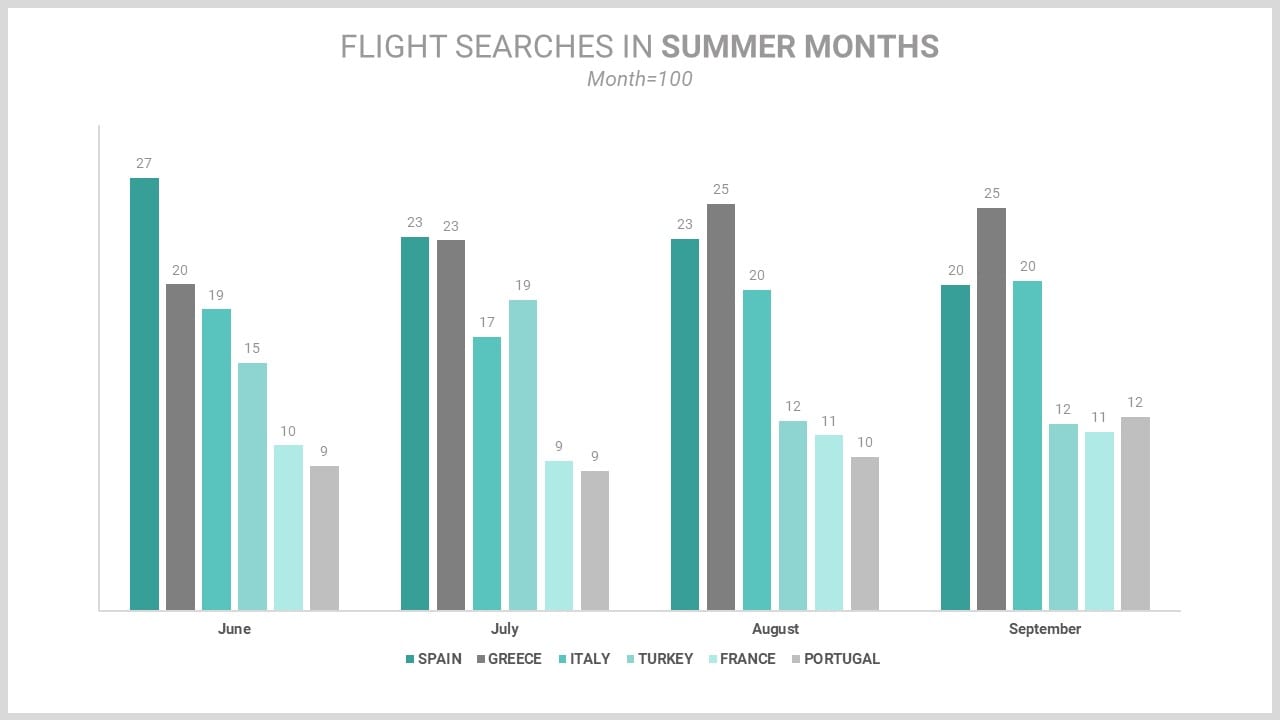