The tourism recovery that we’ve all hoped still seems to be a long way away, a phase that has yet to truly begin; although in “normal” times, travelers often began to plan summer vacations and short spring getaways about this time, virus complications and vaccine trends (or lack thereof) are still holding back mobility. In all likelihood, the recovery of tourism will not happen all at once; instead, recovery will take place at different speeds in different countries, based on many different factors, but especially vaccination roll-outs. Some countries, like Spain, may be able to see signs of recovery, as early as summer, 2021. TREND. According to data on flight searches, Spain is the third most searched country in the world, second only to the USA and Russia; Brazil, Italy and the UK are also popular, though less so. Among the top ten countries in terms of the number of searches, almost all of them have experienced a decrease in searches, compared to January; however, it’s important to remember that January is a month that is still positively influenced by travel for the Christmas holidays, so it doesn’t necessarily indicate an ongoing trend. On the other hand, the 9% increase in February recorded by Spain is encouraging. The other countries that registered a positive change were Italy (7%), Turkey (11%) and South Korea (23%), Japan (16%) and Thailand (5%). 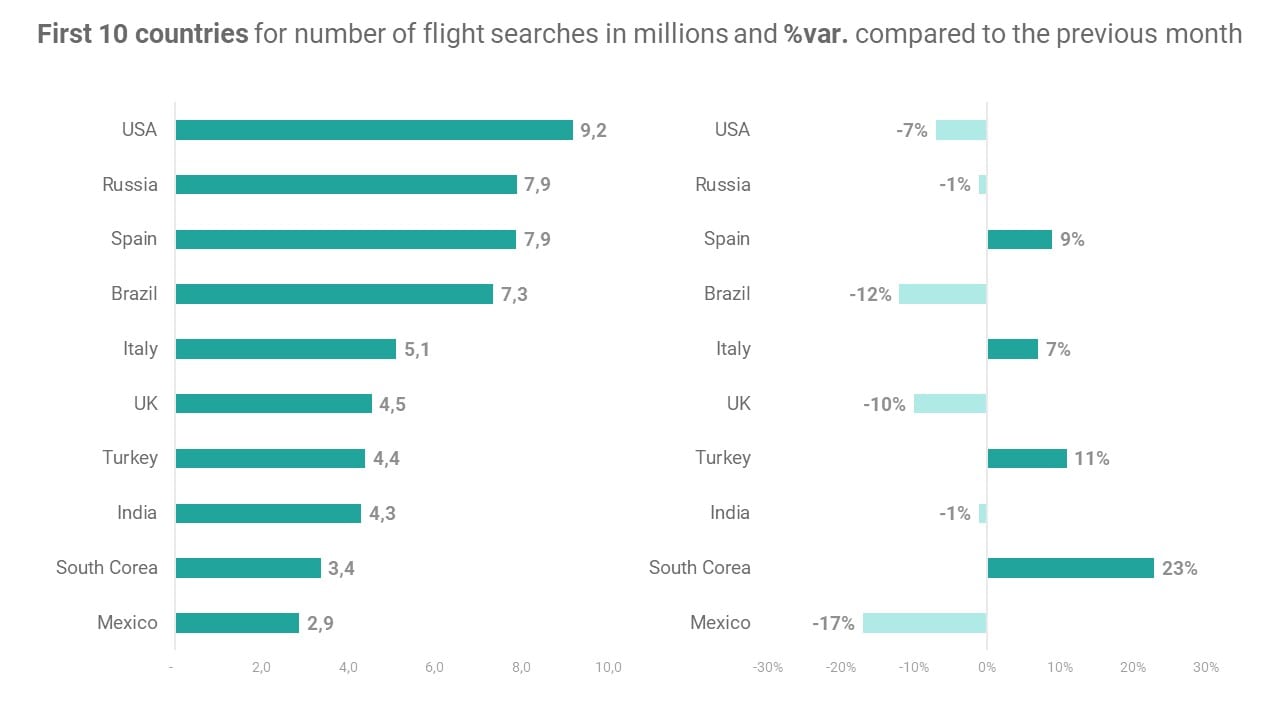 Travelers from all over the world seem to be confident about the future of travel, but how the recovery actually plays out depends on the specific regulations in travelers’ country of origin; in the last few days, for example, we could clearly see the impact of the plan to ease restrictions in the United Kingdom to allow Brits to travel, as early as June. Since that news was announced, Spain has been the most searched Mediterranean country, with a 30% increase in the last week. In fact, the UK seems to be the most active market at the moment; the surge in searches in the last week can be attributed 49% to the British, 27% to the Spanish and 5% to the Germans. According to Jet2holidays, the UK’s leading Mediterranean tour operator, the UK government’s announcement has sparked a rush of bookings, especially for mainland Spain, the Canary Islands, the Balearic Islands, Portugal, Greece, Cyprus and Turkey. WHERE. During the last thirty days, travelers’ searches have been concentrated towards a few destinations: 31.5% of searches were for the Canary Islands, followed by Madrid (14.0%), Balearic Islands (13.9%), Catalonia (13.3%) and Andalusia (12.4%), making it clear that the archipelagos will be the first Spanish tourist destinations to take off again. The Canary Islands have opened the first tourist corridor in the Mediterranean, thanks to the Italian tour operator Alpitour, while the Balearic Islands have proposed to be the first Spanish destination to offer a health passport to European travelers. In addition, at the moment the Canary and the Balearic Islands are respectively in first and third place in the ranking of Spanish regions with fewer infections per capita (the only exception being the island of Ibiza, which has a more complicated health situation). On the other hand, in the Madrid region it seems that the increases recorded were mainly caused by the need to return home, due to the new restrictions limiting mobility, in force since February 18; since the regulations went into effect, searches have dropped by 81%. During the last week, searches for Spain have increased by 8.3% and seem to be all directed towards ski destinations; at the moment approximately half of the ski lifts are open, but some (such as those in Andorra) are reserved for residents. In particular, searches have more than doubled for the airport of Huesca-Pirineos, which serves the central Pyrenees area and from which it is possible to reach the resorts of Baqueira-Beret, Boì Taull, Formigal, Cerler and Astùn. WHEN. The most active markets, Spain and the United Kingdom, follow different trends in terms of arrival dates. Spaniards are looking for flights with a relatively short booking window, with a peak in March, which explains the searches for travel to ski destinations. The British are restricted by the timing of the easing of restrictions and, as a result, are looking for flights mainly for the summer season: 16.8% would like to reach Spain in July, 16.9% in August and 12.6% for September. 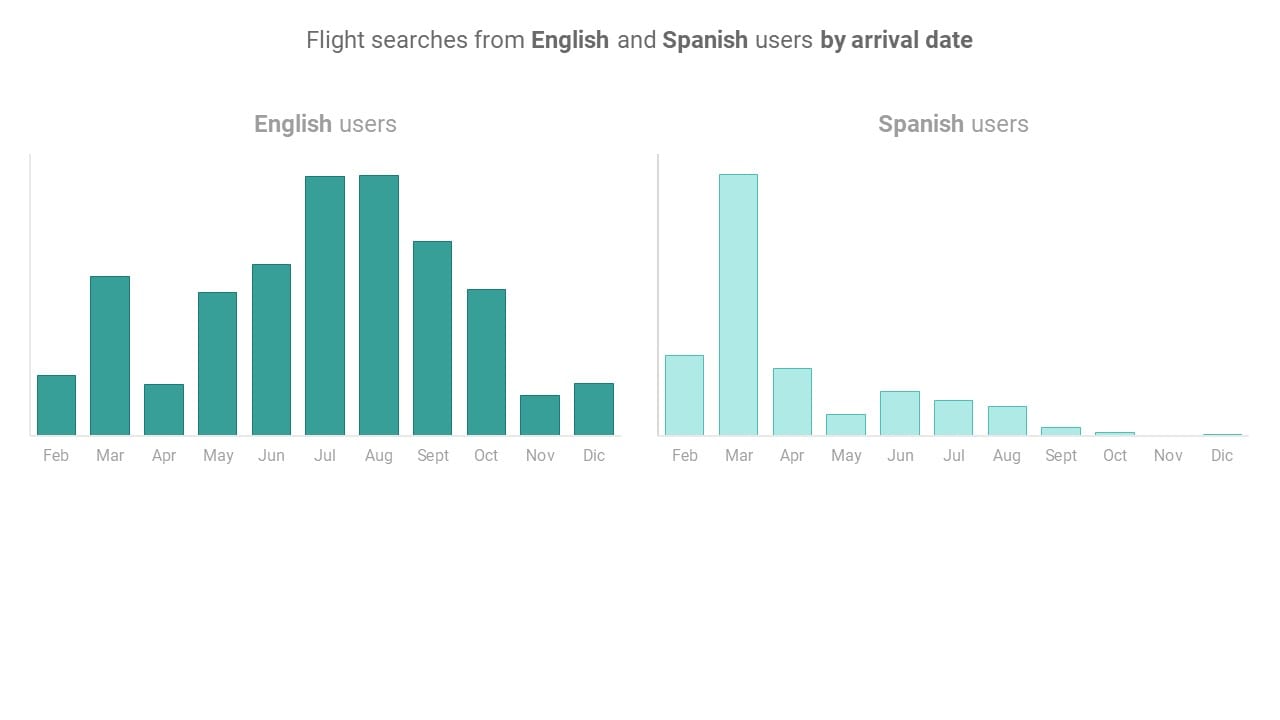