In 2021, Spain was one of the first destinations to commit to recovering tourism, establishing a plan to ease restrictions, which would allow the country to reopen to tourists (albeit, only partially) as early as Easter. Today, Spain is still the most popular Mediterranean destination, in terms of travel intentions, and is still the European country with the highest number of flight searches – holding this record for more than four months.

In particular, the decisions taken regarding foreign mobility by the UK and Germany – two very important markets for Spanish tourism – have had a strong impact on Spanish tourism. According to INE data in 2019, British and German tourists together accounted for around one-third of total arrivals, which were often geographically concentrated in a few highly touristy areas. The succession of openings and closures by the two countries has certainly had a negative influence on the Spanish market, challenging travelers and discouraging them from traveling.

The potential market lost is incalculable considering that even today, despite the restrictions, the UK and Germany remain the top nationalities in terms of number of searches to Spain. 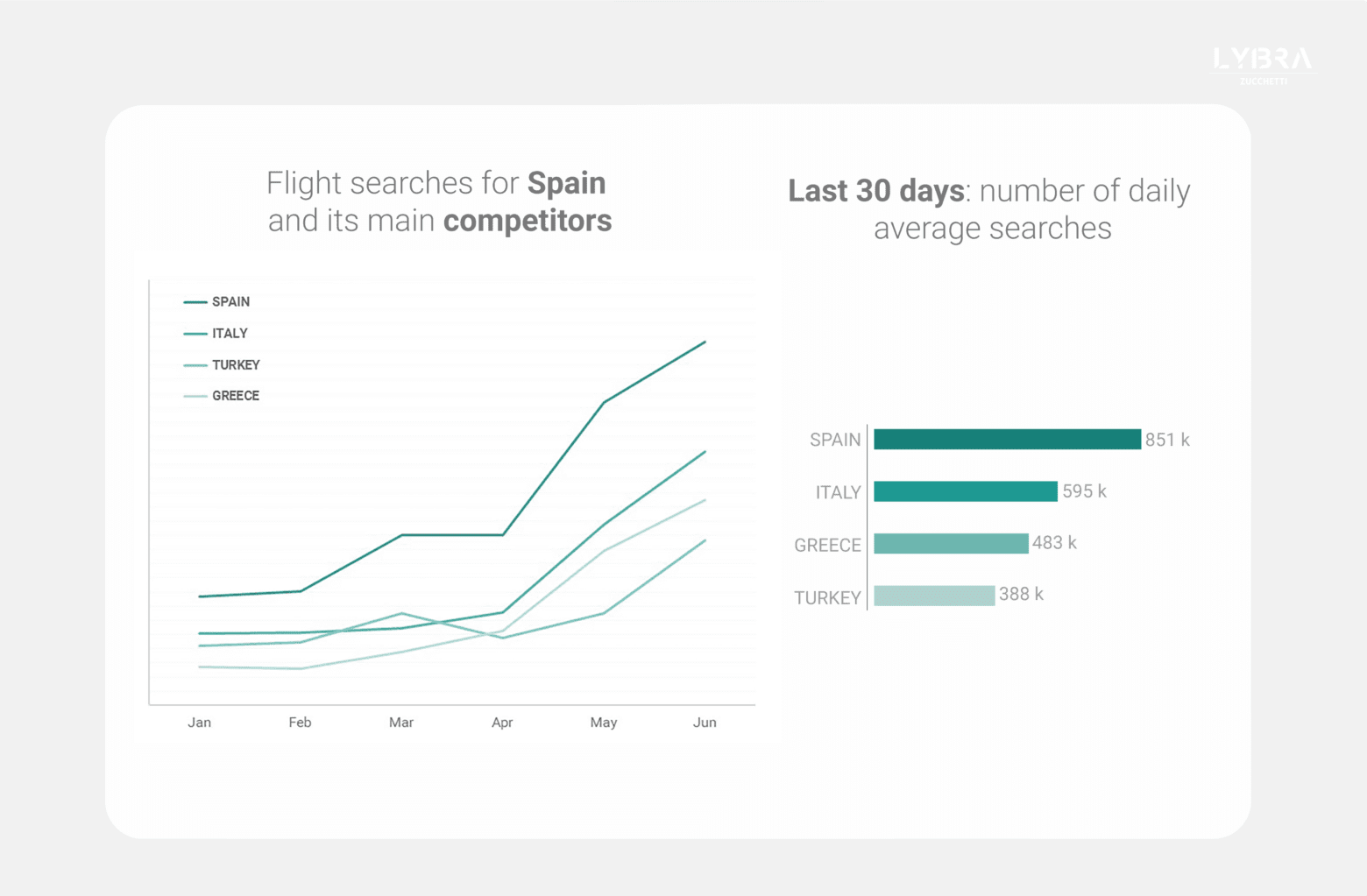 JULY IS THE MOST POPULAR MONTH FOR TRAVEL. Considering only the summer months, the vast majority of searches (57.2%) are for trips arriving for July. Spaniards represent 22.6% of travelers, but international travelers come mainly from Brazil (22.6%), Portugal (20.4%), the UK (10.0%), Germany (9.0%) and Italy (6.1%). On average, 72% search for a flight for a single person; 20% are couples and 8% families. Travelers from Portugal have the highest rate of searches for singles (81%), while Brazilians search very little for family trips.

Travelers prefer to leave on Fridays or Mondays, and the most popular dates are the first weekends in July: searches are gradually decreasing, halving in the third week of August. The data does not show any peak for the period of , but there seems to be, rather, a strong interest in the period from 30 July to 3 August.

Italian travelers are the only ones to have different preferences, as the most desired month for travel is August; in Italy, travel in August represents 49.7% of searches, with July only at 40.7%. The interest is concentrated in the period from August 7-16, a period for which average daily searches double, rising from 23.4 thousand to 46.5 thousand per day.

THE ENGLISH MARKET. Travelers from the United Kingdom also behave differently from the average, but in this case, it is not a question of preferences: the trend of flight searches to Spain by the British recorded a considerable peak on 25 June – after the Balearic Islands became part of the UK’s Green List of COVID destinations. Together with Malta, the Spanish archipelago is the only Mediterranean destination on the Green List. This surge (+275%) lasted only three days but British searches now remain higher than in previous weeks.

Today, British demand is concentrating mainly on the Balearic Islands: 62% of the flights searched in the last month were to the archipelago, with the remainder equally distributed across the rest of the country.

The insecurity of this market can be read from the information on departure dates: the fear of new restrictions and uncertainty about the future is pushing British users to try to reach Spain immediately, with last-minute trips in the first weeks of July being most popular. Flights departing between 1 and 17 July account for 47.5% of the total number of flights searched by the British. 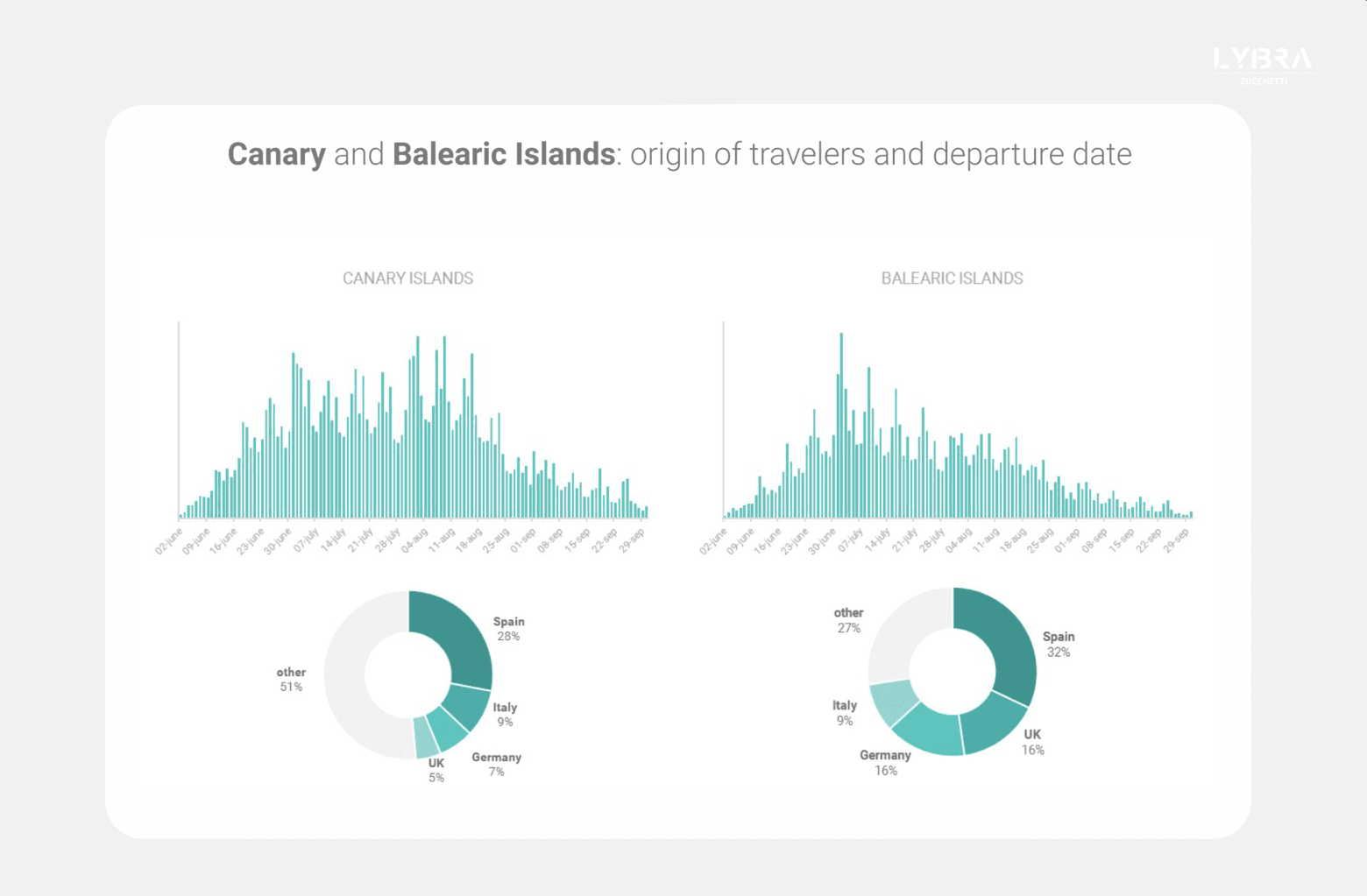