The demand for travel to Spanish destinations is in sharp decline and the negative trend is continuing for the third consecutive week; due to the worsening of the fourth wave of COVID, the Spanish government has been forced to reintroduce some restrictive measures.

Spain is experiencing a worrying health situation and this is creating a great deal of uncertainty in tourists: the increase in outbreaks due to the Delta variant – especially in densely populated tourist areas – and the reintroduction of curfew in some regions is negatively affecting travelers’ perception of Spain as a safe destination, and the travel industry is already feeling the effects of this change in perception.

The desire to travel to Spain has definitely decreased. In the last thirty days, searches for flights have decreased by 15.1%; in fact, there are approx. 3,870,000 fewer searches than were done in the previous thirty days.

Of course, the increase in infections and the spread of the Delta variant is a concern for all European countries, but Spain is suffering much more than its competitors; only Greece is recording a similar contraction in demand, but Greece’s travel demand stops at -11.3% (a decrease of 1,620,000 searches), which is still significantly less than Spain’s current contraction in demand. Italy is recording a much smaller contraction in demand (-4.8%, or 861,400 less searches), while Turkey is losing -1.5% in the last thirty days (a decrease of 173,400), with a worsening concentrated in the last two weeks.

Until now, Spain was the country that had had the most interest from travelers for the summer reopening; in May, travel intentions grew very consistently, with searches increasing by 78% compared to the previous month, and then a further increase of 19.4% in June. These figures are still very far below pre-COVID volumes, but Spanish tourism performance was promising.

The change began June 24, when tourists intending to reach the peninsula began to gradually decrease, first with an average daily rate of -0.6%, and has since worsened, in the last two weeks, to -1.2%, with approx. 1,300,000 searches less in the last 14 days. 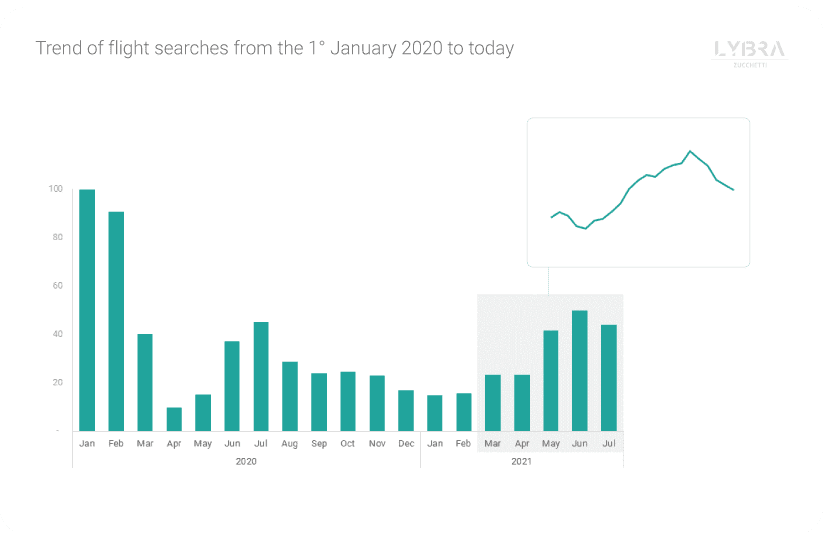 The excitement of travelers gradually began to decrease when the spread of the Delta variant sparked tourists’ fears and collapsed when the health situation in well-known tourist destinations – such as the Balearic Islands and the Canary Islands – began to deteriorate. In fact, the Balearic Islands had the most significant contraction in demand, which can be linked to the increase in COVID cases in the archipelago. Spain, as a whole, experienced 3,870,000 less searches in the last thirty days, and the Balearic airports have lost 2,060,000, which means that it accounts for 53% of the total loss in searches in Spain.

Due to the numerous outbreaks and the great importance and weighting that the destination has had on summer air traffic, the Balearic archipelago has recorded the worst performance in the last thirty days: -28.1%. Majorca airport and Ibiza are those with the highest negative percentage change in all of Spain, with a 28.2% decrease and 24.4% decrease, respectively. Menorca is in fourth place with a contraction of 31.5%.

To find out more about the upcoming travel demand in your city, please book a free demo to learn more about Lybra Assistant RMS’ Flight Module, which provides access to real-time data for your specific destination.