Today, the entire tourism industry is hoping that vaccines will enable the recovery of the sector; unfortunately, even with the proposed vaccine passport (which would allow vaccinated citizens to travel without restrictions), all European countries are not satisfied with the safety of that plan. Some believe that the passport will become a source of discrimination that would, in fact, make the vaccine compulsory; alternatively, others – like Greek Prime Minister, Kyriakos Mitsotaki, who was the first to propose this measure – feel that the passports will be the only way to get the tourism industry started again. TREND. While the rest of Europe is in the midst of the debate, in early February, Israel and Greece reached a bilateral agreement for the creation of a tourist corridor; from April onwards, the mutual recognition of vaccination certificates will allow immunized people to travel freely between the two countries. The news was made public on February 3 and since that date, both countries have recorded an increase in interest from travelers: Greeks have begun to look for flights to Israel and vice versa, with an average growth rate higher than in days leading up to the announcement. The shift in travel demand between the two countries is clearly seen in future flight search data only, because border crossing bans restrict land-travel between Israel and Greece. Thanks to the information on the nationality of the user, it is clear that the increase in searches concerns only the two countries involved: in the last 10 days, the number of Israelis interested in traveling to Greece has increased by 7.3%, while the other nationalities have increased, on average, by only 0.9%. Similarly, the number of Greeks wanting to travel to Israel has increased by 13.2%, while other nationalities increased by only 2.5%. At the moment, it seems that it is the Israelis who have greater access to the vaccination, enabling a quicker distribution amongst the population with 45% of the population already vaccinated; comparatively, Greece is behind on its vaccination schedule, with only 4% of the population vaccinated, to date. Another factor that complicates travel to Israel is the fact that Tel Aviv International Airport is still closed, and will not reopen until February 21, making it impossible for travel from Greece to begin until that date; as such, Greek destinations are currently receiving the most attention from potential travelers. Even so, in both countries the news of reduced restrictions stimulated demand, even more than the announcement of the first vaccine did. Additionally, the increase in search traffic between the two countries is even more significant when we consider that many consumers are still unsure of the safety of plane travel, and that, at the moment, the vaccinated population of both countries that can take advantage of the tourist corridor are middle-aged or older people. WHEN THEY SEARCH. During the last few months, the average booking window has fallen sharply and, in most countries, people are looking for flights departing within the current month (mainly flights for reasons of necessity). Flight searches were most concentrated during Easter week. In regards to summer travel, the effects of the health passport are especially noticeable in Greece: in the last ten days, flight searches by Israelis for the month of May have almost doubled (up 73%); for June, they have increased by 18%; for July, we have seen an increase of 29%; and in August, we have seen an increase of 6%. On the contrary, for the reasons already mentioned, Israel did not experience the same revival of demand: the increase in searches for the summer months was much more limited, to the point of being negative for the months of July (down by 12%) and August (down by 21%). 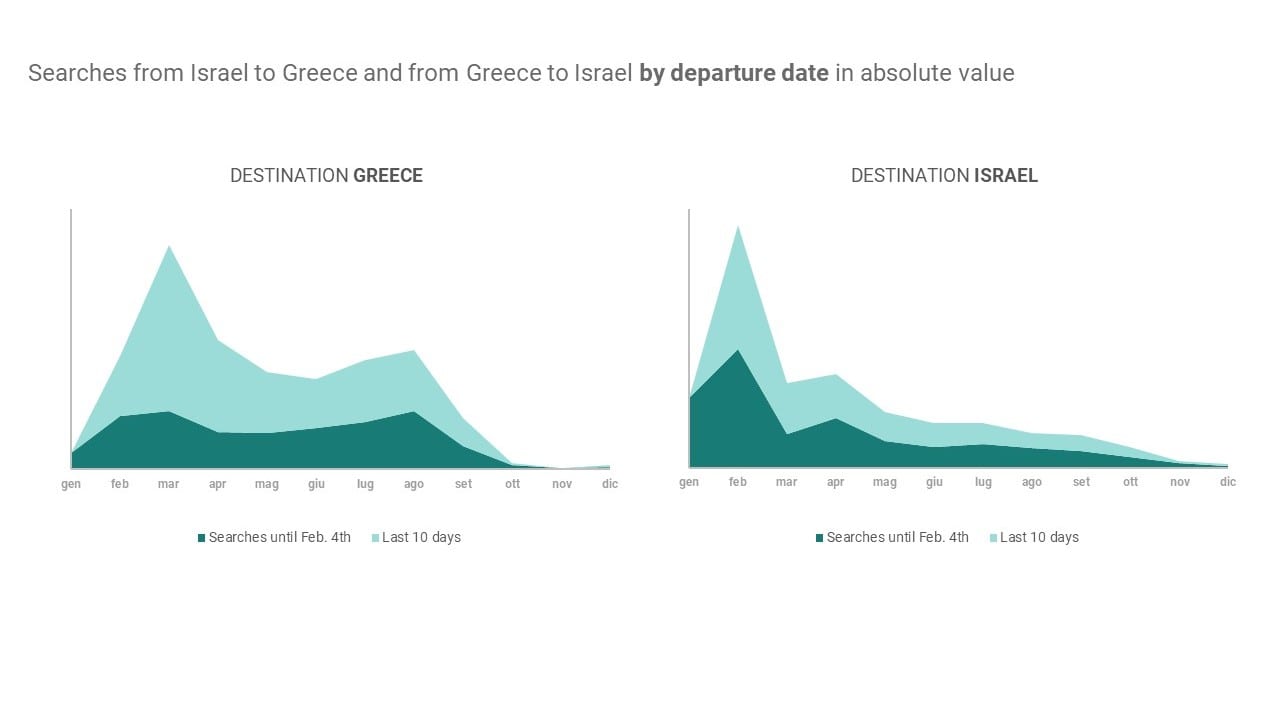 The announcement of the tourist corridor has indeed stimulated demand in the two countries and it is hoped that soon others will follow suit. Seeing the positive impact that a tourism corridor can have on travel demand, Israel is already in talks to extend the corridor to Romania, Serbia, Cyprus, the United Kingdom, Estonia and Georgia. In some European countries, there is a certificate that frees people who have been vaccinated from travel limits and restrictions, but only allows internal travel, so it remains to be seen what other countries will decide in the near future.

We're happy to announce our new partnership with Swiss Quality Hotels International (SQHI)! Thanks to this partnership, SQHI affiliated hotels will have privileged access to our revenue management solutions which help hoteliers around the world increase revenues and...